The Water Tower on Grand Avenue is so well know, businesses are named after it, directions are given using the Water Tower as a reference, it is on the National Historic Registry and, even though it sits in a neighborhood called “College Hill,”  most people refer to it as “The Water Tower District.” 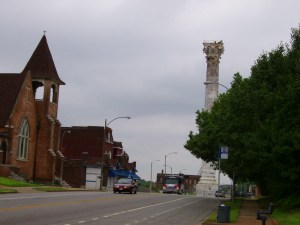 My initial visits to the Water Tower District was to meet and help a remarkable gentleman, Otis Woodard.  He served the community, the poorest of the poor, the people who had been cast out, thrown away by society.  Otis had a cupboard open to anyone, on the side of his home and he had a sound system set up so he could hear anyone outside crying.  If he heard someone in need, or distress, day or night, he would go outside to help and comfort them.  He provided transportation for those with jobs, so they could get safely to work and home again and he found ways to help new, or expecting mothers, even offering lessons on cooking, raising and nurturing a family.

Otis has since left us, but he leaves behind a legacy, showed us a way, provided us with “Peace Park.”  at anytime we can choose to follow his example.  (Here is a little more of Otis, just because.)

If you choose to listen to Otis, you might hear a little about how this area holds infinite treasures of the heart (did you notice the water tower in the background?).  I’ll continue to share a little about the Water Tower ItSelf.  I read some stories about how water pressure was a life changer in the 1800’s.  It’s something I did not consider, things like being able to get water to fight a fire, or be amazed when you could soak your entire body in a bathtub.

George Barnett, once considered the “Dean of St. Louis Architecture,” built the Water Tower in 1871.  It served to regulate water pressure until 1912.  For a while a light was placed on top of the tower to direct air craft.  Eventually the community decided it was important to restore the tower, it was put on the National Register of Historic Places in 1970.

Somehow this tower means more, in the hearts of humans, than first glance would tell us. 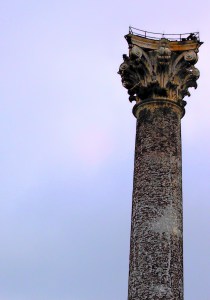 Posted by Maggid at 8:40 PM
Email ThisBlogThis!Share to TwitterShare to FacebookShare to Pinterest
Labels: architecture, Free, then & now