Take your time, stroll into Levine Hat Company and you’ll know what people mean when they say, “Be Somebody, Wear a Hat!” 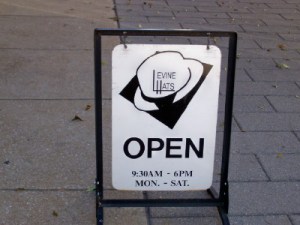 Levine Hat Company has been helping our “style appeal” for more than a century.  Anytime you see a stylish gentleman, or well dressed band, chances are they are regulars at Levine Hat Company.  I don’t suppose it’s my place to name drop, but I assure you, plenty of stars and high-profile people got those stylish hats right here, on Washington Ave. 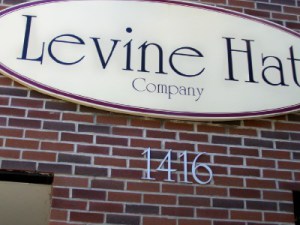 The place is HUGE.  They have three floors of hats on display.  It seems they carry any brand worth wearing.  I’ve been told they are the largest retail Hat store in the world.  Large or small It wouldn’t matter to me, though – because they have that “cool” thing going on.  They have everything you need. 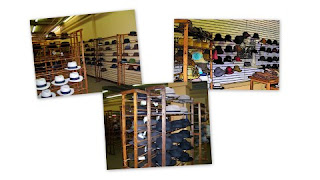 “If You Can’t Find it at Levine’s You Don’t Even Need a Hat!”

The Company was established by Benjamin Levine in 1903, and I hear the fourth generation has just begun to work in the store.  Such a great place simply has to last a really long time. 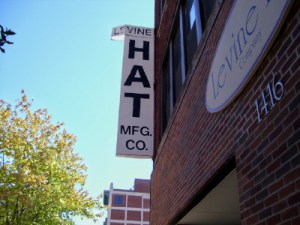 Here we are in the 21st Century, it would be sad if you couldn’t visit in person, but, you can can still shop on-line, YES!  they’ll ship your hat and accessories to you, you can stay in touch by reading their blog, you can ask questions, you can even learn Proper Hat Etiquette, something we would all be better knowing.

AND, they can customize your hat – we all know you are one of a kind – your hat can be, too! 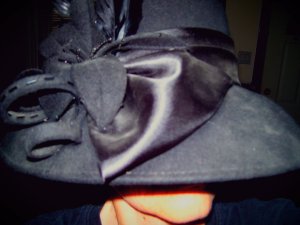 Email ThisBlogThis!Share to TwitterShare to FacebookShare to Pinterest
Labels: "Be Somebody"

Thursday Morning – along the way

Plans and schedules needed to be tossed this summer.  i have found, keeping an open heart can lead to excellent adventures so. I am sharing a little of my Thursday with you. 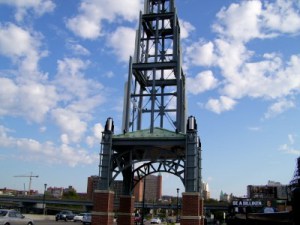 It wasn’t until the Grand Avenue Bus Station,
I thought to pull out my “point & shoot.”
I’m standing with a colorful group of people, on the north bound side of a bridge, rather high up, with traffic zipping about.  We are waiting for the #70 bus.  It goes past some truly fabulous places.  We have “Grand Center,”  where Powell Symphony Hall and the Fox Theater live . . we pass Saint Louis University and the Veterans Hospital, then the scenery changes, and we come to part of the city that delights and fascinates me, although, many of my peers pretend it is not there.
I am enrolled in a class in the “College Hill” neighborhood for the next couple of months.
We’ll see what manages to find the way into my camera, okay? 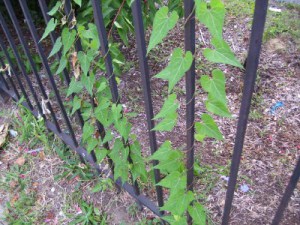 I arrive super early, and yesterday the weather was splendid, so I decided to walk a couple of blocks to “Peace Park.” 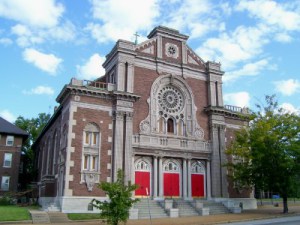 Across the street stands this lovely church house.  I don’t know enough about the neighborhood, yet.  I wonder if the church is used?  A cute young lady ran in front of the building shouting “take my picture!”  I enjoyed her dancing.  There are matching angels on the front of this place.  Just around the corner i should see the park. 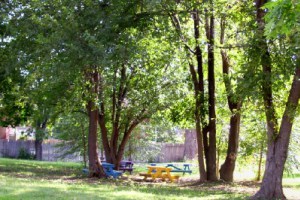 Morning Light across the park gives it the feel of Hope.  There are a few people using  facilities on the property.  Their eyes have trust, I will not use my little camera, so they feel safe.  The place was designed with an open air kind of shelter, and there’s an enormous “feasting table” so community members can share in a way that offers dignity and respect to everyone. 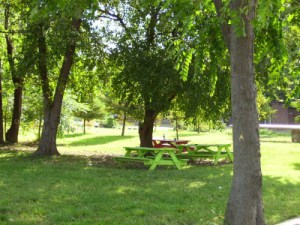 You can barely see it, in the left part of this photo, I captured part of the “feasting table.” 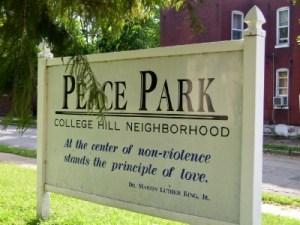 It’s time for me to cut across towards my class and sign in.  I’ll be there a few hours, then head back home. 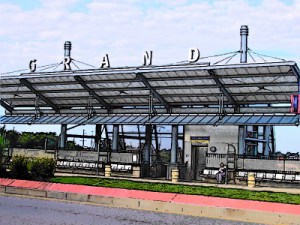 Here’s where I’ll get off the bus, then head downstairs to catch a train.

i wonder what we’ll find next time?

Thank you for visiting.

Email ThisBlogThis!Share to TwitterShare to FacebookShare to Pinterest
Labels: Hope, walk about

I have been referring to this person as “Grandfather Danforth” since 1982, even though we are not related.  His name is William Henry Danforth and he has become one of my heroes.

One of the first side jobs I had in St. Louis was “animal wrangler.”  That calls for adventurous “helpers” to catch, and maybe groom, diverse creatures.  It can be silly fun and is a good fit for someone like me, who is terrific with small children and creatures.

We were at “Ralston Purina,”  also referred to as “Checkerboard Square” and, since I’m too curious for words, I looked around and saw a display of little books created by “Grandfather Danforth” intended to encourage everyone he met.  Inside the pages of these books were simple truths that a lot of us overlook.  Some of these writings have been forgotten over time, but one,  “I Dare You,” is still being printed and sold to people looking for encouragement.

Considering good stuff here in Saint Louis, “Grandfather Danforth” is top of my list.  I began to research to share with you, and now for me, he has become a Hero and person worth remembering. 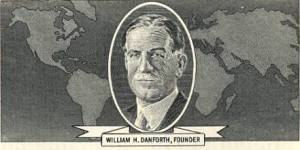 He was born in Mississippi County, Missouri in 1870 and learned to help his dad run the family store in Charleston, Missouri.  He talked his parents into sending him off to school, where he met an educator, who noticed promise in the boy, but also constant health issues.  The teacher gave William a “Dare” to become the healthiest Boy in the school, which set this young son of a business owner on a path to Great Personal Achievement.  His own family seems to be carrying the Danforth Tradition in splendid manner.

In 1892 he graduated from Washington University and by 1894 he’d found a great idea.  Realizing that animals need to eat he became a business pioneer in the formula feed business.  There was new science to reduce the risk of disorders in livestock through good nutrition.  Disorders like “bloat” could be reduced, health could be improved, making farming more productive.  Danforth worked in the plant and traveled to area farms to sell the feed. As the product became successful, Mr. Danforth began to travel in larger circles around the region.  During those early years he continued to return home and mix feed in the plant.

Mr. Danforth said he enjoyed new things, but when he found something Good, he stuck with it.  It is true he became quite an innovator and adventurer, BUT, he met and married Adda Bush in 1894 and they enjoyed a happy and meaningful life of many years together.

The original company was incorporated as Robinson-Danforth Commission Company.  It took only two years for Danforth to buy out his partners.  Two days later a terrible tornado flattened the facility.  This proved to be one of those good news, bad news situations.  Somehow, it seems Mr. Danforth could find the path to success, and share every bit of good he found with as many people as possible.  Has it ever seemed that some people find Good hidden inside of every “difficult” situation?

The Company, grew into one of the top 100 corporations in America and Danforth became its first president.  In 1898 he introduced a cracked-wheat cereal into the company and named after a famous health celebrity of the 1890’s called “Dr. Ralston.”  The name of the company was changed to “Ralston-Purina” and, by 1902 the checkerboard logo was added.

So many of our young people were sent to Europe during the First World War, Mr. Danforth was offered an opportunity to pull together Soldier Social groups through the YMCA.  The need was great and when it seemed overwhelming, Mr. Danforth coached the young soldiers to create their own groups.  Even if it was a gathering for book discussions, he would encourage young people to get together and create positive moments to share.  He wrote memos, letters and stories to be read to his “Purina Family” every Monday, in order to keep them unified at home, while he personally did what he could to bring hope and comfort to the soldiers abroad.

Mr. Danforth believed in the Youth of America.  In 1924, with many of his friends, he helped to establish the American Youth Foundation.

In 1927 he and his wife created the “Danforth Foundation,” one of the largest private foundations in the region which enabled many young people, male and female to get a quality education.

From 1932 through the end of his life, Mr. Danforth served as “Chairman of Ralston Purina Co.”

It’s hard to imagine one person could accomplish as much as William H. Danforth.  He loved Christmas and started a Christmas Carol Society,  he was active in his church, there are stories that he boosted Sunday School Attendance by giving a live alligator to any young person who brought a friend to church.  (Really, can you imagine?)
He traveled much of the known world, and continued to write letters to his “Purina Family."

Many of these letters were saved and bound.  Our library has many of them in the rare book collection, and a few still available to be checked out, if your request them, you’ll see they are a bit fragile but, really worth reading.

He invested in chapels to stand in the middle of University campuses, so students would have beautiful places to reflect and center.

Adda, his beautiful bride, after so many adventures, had a stroke and remained at home.  William H. Danforth invited company over to make sure Adda was included in as much as possible.  On Christmas Eve, 1955 he left us, not long afterwards Adda joined him.  Their ashes are in one of their chapels, in a youth camp they visited together every summer.

I believe Mr. Danforth even made a way for me to have a future because, when he was supporting the Youth of America, he gave generously to 4-H programs.  I may never have met him, but a special program was created within the 4-H movement that enabled me to train puppies in basic obedience for Guide Dogs for the Blind in San Rafael, California.

I think this man, one of my heroes, lifted the face of our nation for several generations.

Perhaps, if you have a pet, the New Version of Purina, owned by Nestle, is looking after your family, even now.

Relocated from Remember-Freedom to here.
Saved comments from my friend, Susie-Mac -
'Cause I enjoy her company.